YAY for Tuesday!!! Ohhh baby! Is it getting hot in here? The books that are out today, ALL of them are now on my to read list! Seriously… HOT! Perfect for summer reading.

She’s a mortal with dark powers…

After a tragic accident scarred her body and destroyed her dreams, Leila never imagined that the worst was still to come: terrifying powers that let her channel electricity and learn a person’s darkest secrets through a single touch. Leila is doomed to a life of solitude…until creatures of the night kidnap her, forcing her to reach out with a telepathic distress call to the world’s most infamous vampire…

He’s the Prince of Night…

Vlad Tepesh inspired the greatest vampire legend of all—but whatever you do, don’t call him Dracula. Vlad’s ability to control fire makes him one of the most feared vampires in existence, but his enemies have found a new weapon against him—a beautiful mortal with powers to match his own. When Vlad and Leila meet, however, passion ignites between them, threatening to consume them both. It will take everything that they are to stop an enemy intent on bringing them down in flames. — Goodreads

Does it get any better than this guy? AND he’s a vampire? Whew… Hold me back!

Leader of the most powerful army in the heavens, Zacharel has been deemed nearly too dangerous, too ruthless–and if he isn’t careful, he’ll lose his wings. But this warrior with a heart of ice will not be deterred from his missions at any cost…until a vulnerable human tempts him with a carnal pleasure he’s never known before.

Accused of a crime she did not commit, Annabelle Miller has spent four years in an institution for the criminally insane. Demons track her every move, and their king will stop at nothing to have her. Zacharel is her only hope for survival, but is the brutal angel with a touch as hot as hell her salvation–or her ultimate damnation? — Goodreads 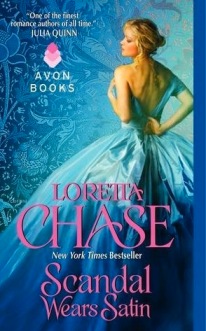 From the Journals of Sophia Noirot: A dress is a weapon. It must dazzle his eye, raise his temperature . . . and empty his purse.

A blue-eyed innocent on the outside and a shark on the inside, dressmaker Sophy Noirot could sell sand to Bedouins. Selling Maison Noirot’s beautiful designs to aristocratic ladies is a little harder, especially since a recent family scandal has made an enemy of one of society’s fashion leaders. Turning scandal to the shop’s advantage requires every iota of Sophy’s skills, leaving her little patience for a big, reckless rake like the Earl of Longmore. The gorgeous lummox can’t keep more than one idea in his head at a time, and his idea is taking off all of Sophy’s clothes.

But when Longmore’s sister, Noirot’s wealthiest, favorite customer, runs away, Sophy can’t let him bumble after her on his own. In hot pursuit with the one man who tempts her beyond reason, she finds desire has never slipped on so smoothly . . . — Goodreads

Half-werewolf, half-Aedh Risa Jones can enter the realm between life and death, and she can see the Reapers who collect the souls of the dead. Now, she is using her gifts—and the investigative know-how of a man who broke her heart—to find a cabal searching for the power to control time, reality, and fate. And this is besides her work for the Vampire Council, half of whom want her dead.

But for now the Council needs her alive. Someone is killing blood-whore addicted vampires, and Risa must find the guilty party. If she succeeds, she may finally convince the council to lift the execution order on her life. But before she succeeds, she must first survive… — Goodreads