This is the review on A Clockwork Orange republished in the United States with the 21st chapter. The author vehemently states that this is the way he say the story and thought that the story was never quite complete without it. He does leave it up to us to choose whether it should be the full 21 chapters or as the publishers pushed it, the 20 lacking that one that Anthony Burgess believed was so very pivotal for his main character. I will not give anything away, but I will say I can see both sides of this story. The 20th chapter ended eloquently, almost beautiful but the 21st chapter gives us that tad bit more that we may have needed if you had any questions left unanswered by this point that is. Which honestly I did not. But I do think the 21st chapter added something that the first 20 just did not have. And I’ll leave it at that. 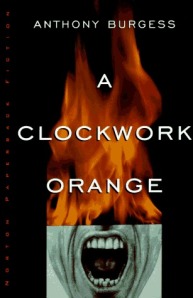 A vicious fifteen-year-old “droog” is the central character of this 1963 classic, whose stark terror was captured in Stanley Kubrick’s magnificent film of the same title. In Anthony Burgess’s nightmare vision of the future, where criminals take over after dark, the story is told by the central character, Alex, who talks in a brutal invented slang that brilliantly renders his and his friends’ social pathology. A Clockwork Orange is a frightening fable about good and evil, and the meaning of human freedom. When the state undertakes to reform Alex—to “redeem” him—the novel asks, “At what cost?” This edition includes the controversial last chapter not published in the first edition and Burgess’s introduction “A Clockwork Orange Resucked.”

First off this nearly became a DNF. If it wasn’t for my Summer Reading Challenge it very may well would have been. But I trudged through all the slang. While our main character seems like a true jerk in every aspect of the word and language is quite annoying, I pushed through. This fortunately was a 25 point book for the challenge, otherwise I may not have. But I have to be honest here, I am glad that I kept with it. The first seven chapters were really difficult for me but it was all downhill from there. Once I got my stride and could actually figure out if he was talking about his head or toes I started getting into a good rhythm and kept it to the end of the book.

The main character, Alex goes through some changes, as you would expect any character in a book to do. However the changes he goes through are not of his own doing, he doesn’t grow and I think because of that I was holding this book at arm’s length, not wanting to let it in. However after these changes he does actually start to learn. You can start to see his thought process. Instead of just being a jerk he sees what he has done to others and realizes that it isn’t’ a great thing. But again, mostly this is not of his own accord.

Without giving anything away, I would reiterate, this is a good book if you can overlook the massive usage of slang, half of which I had to struggle to figure out. The characters are interesting although a bit two sided. But by the end of A Clockwork Orange I was a semi-fan. Maybe not full own cheering with pom poms, but a fan. And kudos to Anthony Burgess for struggling to get that last chapter in!

Want more dystopian or horror? Try these out! And then let me know what your favorites are! My TBR can always use more books!