I have to say before I start these reviews, that I was very lucky to be in contact with Cecilia Gray. I explained how excited I was about reading the third in this series, When I’m With You, and she graciously sent me the first and second as well even though you do NOT have to read books one and two to understand book three!

I was absolutely in love with these characters and I must say, I can not wait to read more of her works. The plots in these three where fun, easy, and just simply amazing. Fabulous when you need a break from the same old stuff. So, I just wanted to say a special thank you to Cecilia and to let you guys know that these books are fantastic and so worth the itty bitty time that it takes to read them! I definitely plan to reread over the summer!

The last thing that the girls at the elite Jane Austen Academy need is hot guys to flirt with. But over the summer the school has been sold, and like it or not, the guys are coming. And it’s about to turn the Academy—and the lives of its students—totally upside down…

Fall For You: A Modern Retelling of Pride & Prejudice

Fall For You Blurb: 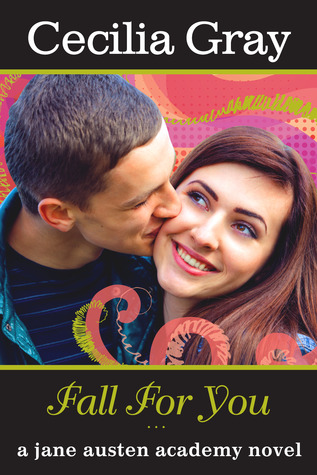 To say Lizzie and Dante are polar opposites is the understatement of the century. He’s a snooty Exeter transfer with more money than Google. She’s a driven study-a-holic barely keeping up with tuition. It’s obvious that Dante thinks he’s way too good for Lizzie. And Lizzie knows Dante is a snob with a gift for pushing her buttons.

But things are changing fast this year at the Academy. And when Lizzie’s quest to stop those changes blows up in her face, taking her oldest friendship with it, she has nowhere else to turn but to Dante, with his killer blue eyes, his crazy-sexy smile, and his secrets… Secrets Lizzie can’t seem to leave alone, no matter how hard she tries…

Retail Links – FALL FOR YOU

Fall for you is a fantastic first book! Not only does it introduce you to the characters of this school, but Cecilia Gray starts winding you around her fingers. And what’s great is, you don’t even notice it until it’s already done!

The plot is easy, breezy, beautiful. Very fun to read as the pacing was fabulous and there was always something around the corner that you wouldn’t expect. The plot development was super exciting. I mean here you have a gal that is totally against everything that is happening to her but is unable to do much about it. And when she DOES stuff about it, it seems like she’s always shooting herself in the foot! Hilarious and yet, at the same time, you feel for her even while she’s creating half of the drama in her life!

Honestly, my favorite character is Lizzie but she has a lot of jealousy going on. It didn’t detract from her character, just showed that she is not perfect, which does add to the story. It did bother me a little bit but not enough to put this baby down! I wanted to know more about this bunch of people and as I got to know them, I definitely felt a connection to all of them. Except maybe Kat, but you’ll read more about her in book three! Thank goodness! I also, really, really want to get to know more about Anne! You get snippets here and there but I want more!

Book #2 Title: So Into You: A Modern Retelling of Sense & Sensibility

So Into You Blurb

Sweet and sensible Ellie hasn’t met a problem her mom’s yoga mantras can’t fix. But when Ellie’s parents threaten to pull her from the Academy just as her flirtation with the cutest boy in school heats up, will Ellie be able to keep her cool?

Retail Links – SO INTO YOU

Just as in the first, this is an easy, flirtatious, and fun read! The characters that you got to know in book one are still all there, which is fabulous because I would really miss them! But here we learn more about Ellie and her issues. The plot was just as great as in the first, although I thought the pace was maybe a bit slower, but not by much. You’re still completely entertained and wondering what in the world these girls can get themselves into next?!!

And in So Into You, there is just as much romance as in book one. But here you are left wondering, what in the world is going on with Edward? He keeps getting close but then backing away! You don’t find out until, oh I think half way through. I was reading way too fast to stop and take notes at that point!

Ellie is definitely having issues in this book and it’s a ride that I really enjoyed taking with her. I’m just glad I didn’t have to wash any dishes to do it! 😉

Book #3 Title: When I’m With You: A Modern Retelling of Northanger Abbey

When I’m With You Blurb

Kat is destined to be a star and her big break has arrived at last! As the assistant to a celebrity classmate on the set of a feature film, she’s going to show everyone she has what it takes. That is, until she discovers pursuing her dreams may mean forfeiting her heart. Unless she can find a way to have both…

Retail Links – WHEN I’M WITH YOU

Now we have Kat’s story! This one didn’t hit me as well as the others did. I thought the pacing and plot development was a bit slower. But maybe I’m already biased to the Jane Austen Academy! Even with thinking this was a tad slower, I still loved the plot.

Kat is a bit of a mess though and it took me longer to actually like her! I don’t know what it was but I just didn’t feel the connection that I felt with the first two. But as the story progresses and you get to know more about her, I started to come around. I was trying to fight it though!!

So, by the end I was a huge fan. And I have to say, all three books ended wonderfully. Not much on the cliff hangers except when it comes to the information about the school. But each gal’s story comes to a good ending but one where you still want to know more! I thought this was brilliant!

Although When I’m With You didn’t hit every button for me, it’s still absolutely fantastic! If you’re looking for a fun read and don’t have time to read the first time, definitely pick this one up! You’ll find yourself reading into the night just to see who Kat’s romantic interest is!

Cecilia Gray lives in Oakland where she reads, writes and breaks for food. She also pens her biographies in the third person. Like this. As if to trick you into thinking someone else wrote it because she is important. Alas, this is not the case.

Cecilia has been praised for “instilling a warmth and weight into her characters” (Romancing The Book Reviews) and her books have been praised for being “well-written, original, realistic and witty” (Quills & Zebras Reviews).

Her latest series of young-adult contemporary Jane Austen retellings was named a What’s Hot pick (RT Book Reviews magazine) and is a Best of 2012 pick (Kirkus Reviews) where it was praised for being a “unique twist on a classic” and offering “a compelling mix of action, drama and love.”

Book Review: A Heart for the Ocean by Taylor Lakke

Book Review: Shadow on the Wall by Pavarti K. Tyler