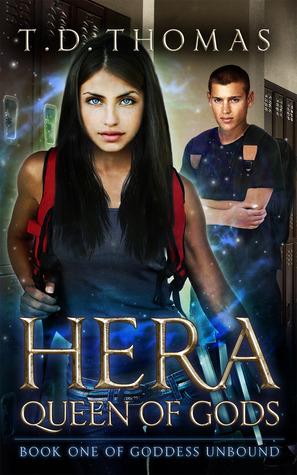 Hera couldn’t care less what the other gods think, even when it’s about her. And it often is. Frankly, Hera couldn’t care less about anything, except doing her duty as queen – protecting order and defending the mortal world against any threats. But when the Fates go missing, Hera and a handful of other gods must temporarily become mortal to search the human world for the missing goddesses.

Hera finds that mortality begins to change her. It’s not just the loss of her divine powers. She expected that. It’s deeper somehow. It’s affecting how she thinks, how she feels, what’s important to her. And it gets much worse after she meets Justin, who defies every prejudice she once had
about mortals. At the worst possible time, and despite all her efforts, Hera’s black-and-white world starts to unravel.

Torn between who she’s becoming and who she needs to be in order to fulfill her duty, Hera must survive a horde of murderous creatures sent to exploit her new weakness. In the end, only Hera can stop a traitorous plot conceived by a secret alliance of ancient and new enemies, a plot that threatens to destroy not only the order Hera is sworn to protect, but all of existence itself.

I knew when I read this synopsis that this was going to work for me but T.D. Thomas’s writing is fabulous. He is able to bring the Gods that we all know about and bring them into mortal form and really made me love them. Hera, who you would think is a bit bitchy, and really she is in this book two, is able to show other sides of herself. She opens up even when she doesn’t really want to.

The plot was seriously non-stop action! Even the beginning was interesting but once stuff starts happening, it just doesn’t stop. The plot will keep you on the edge of your seat. You would think that it would be hilarious to have a young adult book be based around The Greek Gods but it works so well in this.

The only thing that I can complain about is the length. It is about longer than the average read. Or at least my average read. At 536 pages you really have to take a chunk of time out of your days to read this one. It was only slow in a few spots and the ending was brilliant though. So, maybe it could have been trimmed a tad but truly, it was well worth the read. And it still only took me two days to get through it. It’s that easy to read. So, all in all, really good and I’m looking forward to Goddess Unbound #2!

When he’s not battling to save Azeroth from its latest calamity, T.D. Thomas lives with six (that’s right: six!) of his closest friends in a far-too-tiny house in the frosty north known as Canada.

There, they are all ruled over by a little white dog named Teo, who firmly believes he’s a reincarnated Egyptian pharaoh and demands to be treated as such.

NOTE: Teo’s reign of terror is currently being challenged by a new Schnauzer puppy with no respect for the chain of command.

Book Review: The Road to Hell by Christopher Starr