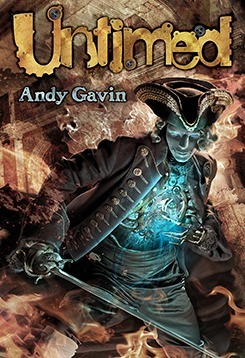 Charlie’s the kind of boy that no one notices. Hell, even his own mother can’t remember his name. And girls? The invisible man gets more dates.

As if that weren’t enough, when a mysterious clockwork man tries to kill him in modern day Philadelphia, and they tumble through a hole into 1725 London, Charlie realizes even the laws of time don’t take him seriously.

Still, this isn’t all bad. In fact, there’s this girl, another time traveler, who not only remembers his name, but might even like him! Unfortunately, Yvaine carries more than her share of baggage: like a baby boy and at least two ex-boyfriends! One’s famous, the other’s murderous, and Charlie doesn’t know who is the bigger problem.

When one kills the other — and the other is nineteen year-old Ben Franklin — things get really crazy. Can their relationship survive? Can the future? Charlie and Yvaine are time travelers, they can fix this — theoretically — but the rules are complicated and the stakes are history as we know it.

What a quirky book! Now, I’m a pretty quirky person so this really was right up my alley. I have the Kindle version and the pictures for each chapter added a bit also. One reason why I love young adult and children’s books, the pictures can add so much! I know this seems rather silly, but honestly I think it’s fun when there’s that little something extra added in! It makes a book stand out. For me anyway! 😉

I’m very much into time travel but I’ve realized, very recently, not so much into Steampunk. I really WANT to be into Steampunk but it’s a genre that just doesn’t capture me. But even with this maybe not being totally up my alley, it was still a ton of fun. The problems that Charlie and Yvaine create for themselves leave you cringing and wondering how in the heck are they going to make everything straight again?! I fell in love with these two characters! Yvaine is a total spitfire though. Watching her deal with Charlie is the most fun of all.

Now, although I’m not into Steampunk, this has so much more to it than just that. The characters are all very interesting, and honestly how Andy Gavin creates the speech at the beginning of the book when Charlie travels to London 1725, is amazing. It was a bit hard to read and I had to read some things over to figure it out but once I got a hang of it it flowed rather nicely.

The ending was the most fun, but the entire read was really fabulous.

Andy Gavin is an unstoppable storyteller who studied for his Ph.D. at M.I.T. and founded video game developer Naughty Dog, Inc. at the age of fifteen, serving as co-president for two decades. There he created, produced, and directed over a dozen video games, including the award winning and best selling Crash Bandicoot and Jak & Daxter franchises, selling over 40 million units worldwide. He sleeps little, reads novels and histories, watches media obsessively, travels, and of course, writes.