Book Review: Witch in the Wind by Brenda M. Collins 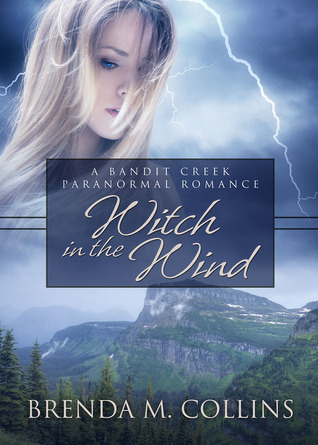 Bandit Creek (Montana), has a new magical dimension, The Otherland. When murder strikes in Bandit Creek, and the victims aren’t who they seemed, powerful guardian warlock, Marcus Egan, is sent from The Otherland to investigate. What he doesn’t expect to find is Avalon Gwynn, the grieving daughter of the victims, who has no idea she’s an extraordinary, hereditary witch. And Avy’s pent up magical abilities have just been set free in the mortal world. Can Marcus catch a killer while making sure Avy doesn’t bring Crow Mountain crashing down on the town—destroying Bandit Creek for the second time?

Marcus debated if he should fade into the background. In his line of work, his talent for making even another witch’s eye look past him without registering his presence was useful.

He felt another power surge. “What the—

The woman wasn’t the magic source. Fierce, dark eyes locked on him, not in a friendly, or mortal, way. And the beast already knew Marcus was there. What the hell is a familiar doing here? Familiars couldn’t be summoned. They appeared only when gifted by a more powerful spirit in times of great danger. There hadn’t been such a creature around The Otherland for centuries. So who sent this one to the mortal world, he wondered. And why?

Pushing away from the wall, Marcus wandered over to the reception desk. By habit, he moved with quiet steps, yet the young woman seemed to sense his approach and turned in his direction. She pulled the cap from her head, pushed loose wisps of hair from her forehead, and looked up at him.

His breath stopped in his throat and his mouth watered. The little nymph was more than the usual pretty combination of golden blond hair and flawless fair skin. Her electric blue eyes, even smudged with fatigue, jolted his gut in a way he hadn’t felt since his teens, when his magical energy was working overtime along with his hormones.

He smiled and managed to keep his stance casual as he kept one eye on the familiar and one on the woman. She seemed startled for a second but then returned his smile with a brilliant one of her own. The familiar didn’t. He bared his teeth and growled.

“I mean you no harm.” He didn’t want the familiar to blow his cover so he stood completely still as he spoke to it directly.

To the woman he said, “Is he always afraid of strangers?”

The familiar rumbled again as if insulted.

“Only you as far as I know,” she replied. Her voice, a rich alto, wrapped around him like a siren’s song. “He was fine with me, and the sheriff, yesterday.”

He blinked trying to regain some control of his brain. “What’s his name?” He eased his hand, very slowly, towards the familiar murmuring reassurances that only the magical beast would understand.

“I don’t know really. I found him last night with no collar.” She shrugged and a light flush colored her cheeks. “I’ve been calling him Busby. You know, after the big furry hats the guards at Buckingham Palace wear. When I first saw him on my porch, that’s what he reminded me of.”

That answers one question, Marcus thought. He’s here to protect this woman. But does she know that? With his hand dangerously close to the familiar’s mouth, he let the beast scent the strength of his power. Warlocks were a level above most magical creatures, having been bred for generations as warriors. Of course, that didn’t mean the familiar wasn’t as strong, or even stronger. No one knew how familiars travelled from witch to witch and many assumed they were from the spirit realm.

Finally, the creature eased back on his haunches.

“Busby’s giving me a reprieve.” He very slowly withdrew his hand. To the familiar he said, “Giving me a chance, aren’t you, Busby. But you let me know who’s got the teeth when it comes to this woman.” He stepped back.

Ok, so I did this tour knowing that this was book SEVENTEEN in the series. Although this is a novella I did realize that there was no way for me to catch up prior to the tour date. So, knowing this I do feel like I missed out on some things. I think this can stand on it’s own but I do want to know more, a LOT more.

Brenda’s writing is really good! It’s phenomenal to read something that is given to you straight, no lolly gagging behind a bunch of useless words! She does describe the situation but she skips crap that we just plain don’t need! Could this have been a full book? Probably! But I’m glad that she does this. I was able to get into the meat of the story very quickly and become interested in the characters much faster because of the way she writes but stuff does happen very quickly because of this. And at the same time it almost takes away from getting to know these characters. I mean the two main characters were kissing and I was like, wait, you don’t even KNOW each other! That’s kind of pivotal right?

Although, if I were to meet someone like Marcus, I don’t think I would be too worried about not knowing him very well. Especially during the kissing part! 😉 Avy is a very interesting characters as well. Distraught over her parent’s death but not in a “damsel in distress” way. Oh no, she’s about to tear some stuff up!! Busby though, ohhh Busby! You were my favorite cuddly character!! Can I adopt you please!?

That being said, there was something missing. Maybe it is the first 16 parts! I’m not sure but I didn’t feel a connection, like, totally in love with the characters as they moved through the plot. That’s not to say that I didn’t have fun reading this, because I totally did. The paranormal element was RIGHT up my alley. The plot was really good,  I just want more!

So, I think I’m going to start with the first 16 parts and then come back and redo this review! I think that would be fair to Brenda, to you, to myself and to her wonderful story!

Brenda M. Collins has wanted to write romance since she was twelve years old. At the age of twenty, she spoke to an editor in Toronto, Canada, who expressed an interest in her story; however, she soon realized it takes more than an idea to be an author. She joined a number of writing groups to learn about ‘the craft’ and completed two mystery manuscripts. To help her fellow writers develop strong business skills, Brenda has published articles, and delivered workshops to hundreds of writers, on career planning, professional networking and presentation skills. Her most recent article, entitled How to Improve your Presentations, is in the 2013 Writer’s Market (Brewer, R.L., ed. F&W Media Inc. p. 153).

Brenda’s debut novel, WITCH IN THE WIND, starts with a murder, but comes to life with witches, warlocks, a canine familiar and a magical dimension called The Otherland. For upcoming titles in The Otherland Chronicles, and other stories, keep an eye on Brenda’s website www.brendamcollins.com and follow her on Twitter.

Book Review: Death is a Bitch by Cate Masters