It all started the day her god raped her.

She transformed into an abomination through his touch. Her skin grew scales. Her eyes turned red. She screamed for help, but all who saw her became stone.

Medusa thought she would be alone forever, until the day a man came to kill her and fell in love instead. Now Perseus is running from those who hired him as he continues to love a girl who could kill him with a glance. 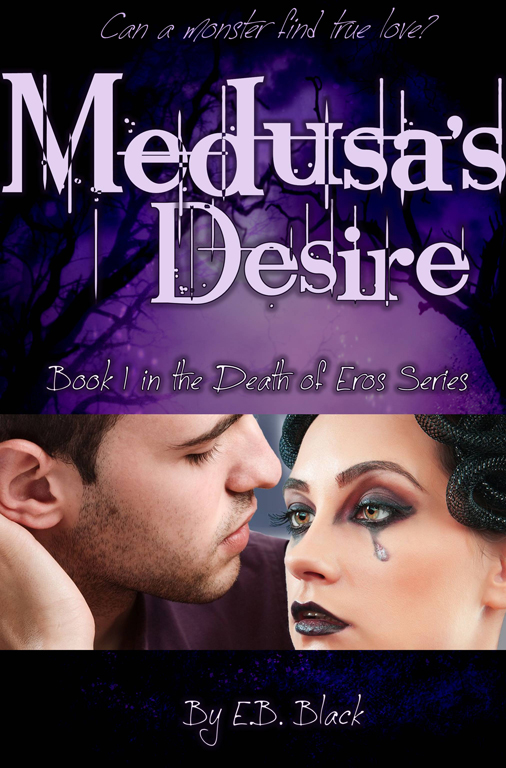 Medusa grabbed Perseus by both shoulders.

He leaped into the air. She was glad to be wearing the invisibility helmet or he might have turned around and been killed by her when he met her eyes.

“I need to get better at hearing you sneak up on me,” he said.

“That’s not important.” She shook him, startled by how easy it was for her to do so. “You have to kill me right now. It’s the only way to redeem yourself. The gods will never know we slept together if I take the secret to my grave.”

Perseus pursed his lips. “I don’t care what the gods do.”

“I was once that way, believing that nothing could harm me.” Medusa grabbed his sword and laughed maniacally. “I will not allow you to suffer as I have.”

Perseus’ eyes widened and he lunged in her direction, but she easily ducked out of his way. “Where are you? What are you going to do with that sword?” He stood still to listen to the direction she was breathing from. He leaped the wrong way and almost fell over.

She lifted the sword and aimed between her breasts. “If you won’t kill me, then I’ll do it for you!”

She stabbed the blade into her chest.

I absolutely love when an author is able to take someone that everyone would normally see as a villain and completely humanify them. I’m sure that’s not a word but it works for me! Medusa is a very strong character. Her choices at the beginning of the book are believable and it’s those choices that lead to her becoming the Medusa that we’ve known and grown to hate.

I can only imagine the work that E.B. Black had to delve into to create this story. And although there is a lot of background, it seems pretty seamless for the most part. I do love mythology but even being a fan I have not read a TON about the Gods so I’m not sure if EB has it dead on but I do know this, she came out with a really interesting read. One of my favorite villains in history now has a story that a lot of us may be able to relate to. Medusa’s life from the get go is difficult but she will not be beaten down even as she struggles to not lose her humanity.

I did get lost in the plot a few times. It wasn’t a bad thing, just a little clunky but maybe that’s because, like I said above, although I’m a fan I don’t know a lot about  mythology. But even with it feeling a little clunky it was fun to read. I would recommend to anyone that likes a really interesting romance with some fantasy thrown in! 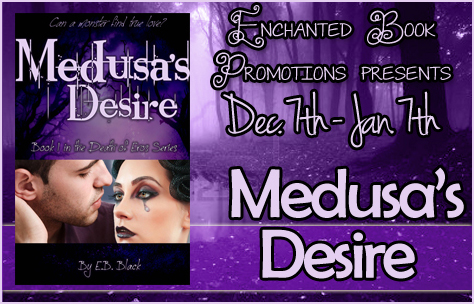 E.B. Black lives in southern California with her family and two rottweilers. She daydreams about dressing up like a necromancer for Halloween and about new fantasy worlds she can throw her characters into.