Book Review: The Legend of Rachel Petersen by JT Baroni 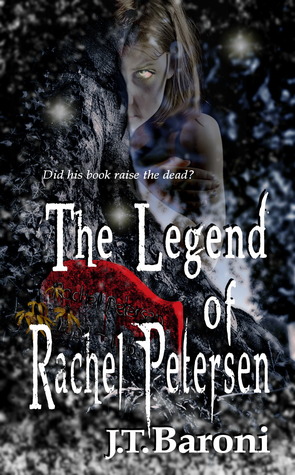 Having experienced the life-changing benefits that leader dogs have brought his Brother, author JT Baroni today announces his spooky new ghost story. As with any good book, there is a twist; Baroni will be donating proceeds from the book to a Michigan leader dog charity.

Johnstown, PA – Following a year and a half of diligent development and editing, JT Baroni is delighted to announce that his latest paranormal tale, The Legend of Rachel Petersen, has been released through Damnation Books.

However, unlike most authors, Baroni won’t be taking the profits directly to his own bank account. Instead, Baroni plans to donate a portion of the proceeds to The Leader Dogs for the Blind – a charity based in Rochester Hills, Michigan. This organization has been providing free leader dog training and placement since 1939, directly changing the lives of thousands along the way.

“Over the past few decades I’ve directly experienced both the generosity and the impact of the vital services The Leader Dogs for the Blind provide,” says Baroni, whose Brother, Gene, has been blind since birth.

He continues, “The visually impaired depend, trust and rely on their dogs each and every day. I was actually Gene’s first ‘leader dog’ as a kid; we were totally inseparable. Since Adulthood he has had three canine companions and I want to ensure that the charity can continue to do their great work.”

Baroni admits to being constantly impressed by the ability of his Brother’s leader dog; helping Gene navigate around his home city of Philadelphia. However, the inspiration for The Legend of Rachel Petersen came from an experience near his home in rural Johnstown, Pennsylvania.

“I am an avid outdoorsman. There are some fascinating places to explore within walking distance of my home. Last year I discovered a grave, deep in the woods. This gave me the inspiration for my book,” he adds.

The eerily enthralling book follows Christian Kane, a thirty nine year-old sports writer who becomes lividly outraged when The Pittsburgh Gazette overlooks him for a well-deserved and coveted promotion. After quitting his job and moving to the country to write fiction, he is inspired by a grave he stumbles upon in the woods.

This experience compels Kane to write ‘The Legend of Rachel Petersen’ – a story about the dead twelve year-old girl who is buried beneath the weathered tombstone. His release unexpectedly climbs the country’s Best Seller lists and is turned into a hugely successful Hollywood movie. With his newfound wealth and fame, Kane is dumbfounded when Rachel rises from the grave, seeking revenge on him for slandering her name.

“As with any timeless classic, there is a twist at the end. In fact, there are two twists!” Baroni explains.

Even though the book has been received into the literary world with critical acclaim, Baroni is conscious not to lose sight of its real purpose.

“Raising a puppy to Leader Dog status is extremely time consuming and expensive. In fact, it averages around forty thousand dollars per dog. I hope that this book will, in some way, relieve the financial burden to The Leader Dogs for the Blind and allow them to continue their great work well into the future,” he concludes.

The Legend of Rachel Petersen is available now in both paperback and e-Book formats from all good online bookstores.

More information can be found at the book’s Amazon Homepage or at JT Baroni’s Official Website.

For a movie trailer of the book, click here.

What an interesting twist to a story. Really cool plot line, definitely keeps you guessing the entire way through. And then the ending comes out from nowhere, which I thought was great.

First of all the characters are really great. Starting with the writer who really is having some issues putting more of himself into the story.

The actual story he comes up with is another legend about Rachel Petersen. The characters in this story within the story are great. The two main characters, Thaddeus and Seth are fantastic. You can tell straight away that they are really close and enjoy each other’s company but what I enjoyed most about them is the razzing they give each other.

The best part is when they stumble upon Rachel’s grave. The boys knew the story and although it scared them, like everyone just thought that it was a legend, not something based off of real life. As the boys learn more about Rachel the story intensifies and the boys wind up trying to learn exactly what did happen to such a young girl nearly 100 years ago. They soon discover that she is real and is haunting them making this both hilarious and scary all at the same time.

The plot jumps between three different stories. The story of the writer, the story of the boys and then Rachel’s story. I got so wrapped up in the boy’s telling of Rachel that I completely forgot that this was being written! It’s very smoothly done and never was I confused about who was doing the explaining or which story we were in. I just got lost IN the actual story, which is fantastic!

It’s scary, it’s fun, there are a few twists. Kept me reading into the night! And I have to admit, I actually jumped a few times while reading!! I should have made popcorn!

Definitely suggest this to horror fans that love a Crypt Keeper sort of a tale. 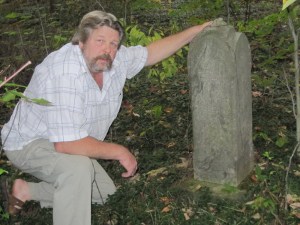 JT Baroni lives in Johnstown, Pennsylvania, a small town east of Pittsburgh. As long as he can remember, he has been an avid outdoorsman, and has always had a fondness for word games and great story-telling literature. His older brother, who was born blind, taught him the game of chess at an early age; consequently, he plays a mean game.

Along with his wife Becky and Son Skyler, Baroni shares their cozy home with a psychotic dog, a full-blooded boxer they christened ‘Butkus’. When he is not on the job as a transformer repairman with the local electric company, you’ll find him either hunting, fishing, or rooting for the Pittsburgh Steelers.

Baroni has also penned several song lyrics, which have been professionally put to music and are currently signed with a music publisher.