-How did this story begin? Was it a character, or a particular image? It began with the idea of New World Order.  I probably sound crazy, but so many things in the world seem to be lining up in favor of a one world government and I had to write about it.  I firmly believe there is a small group of people who control most of the world events such as wars, elections, and economies.  I took my suspicions then combined them with my fascination for biblical prophecy and voila-a paranormal/conspiracy thriller materialized.

-Did you have any growing pains with this novel? It was my first and made some mistakes in the query process.  Once I straightened out my errors-POV being the primary problem-three

publishers were interested.  I signed up with the first one, not knowing any better and, to say the least, was extremely disappointed.  After terminating the contract, I took the manuscript, tweaked it, and then put it up on Amazon.

-How would you most like readers to respond to the novel? I hope they are entertained and learn something in the process.  A great deal of research went into the novel.  I also hope they might even think of their own spirituality.

-What are you reading right now? Are there any authors (living or dead) that you would name as influences? I am reading 4 books right now-Angelology in my car on CD, The White Queen on my Ipod, The 12th Imam on my Nook, and Soul Sisters on my computer.  My biggest influences are King, Brown, Thor, and Jenkins.

-What do you do when you’re not writing? I am a very busy mom who spends endless hours carting kids around to their activities.  I also love to play tennis, walk my dogs, and read.  Luckily, I have a cheap movie theatre by my house and usually see a movie once a week.

-What is your next project? What have you been working on recently? My next project is almost done.  It’s a sequel to my horror novel, Halo of the Damned.  It’s about a fallen angel who runs an ad empire, fathers nephilim, finds a cult to worship him, and wants to secede from Hell.

Check out The Last Degree Prequel as well—Be Paranoid Be Prepared! 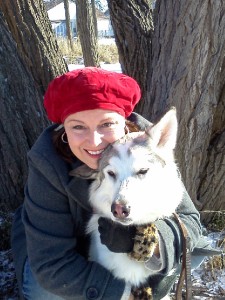 Dina Rae is a new author here to stay.  As a former teacher, she brings an academic element to her work.  Her two novels, Halo of the Damned and The Last Degree, weave research and suspense throughout the plots.  Her short story, Be Paranoid Be Prepared, is a prequel of sorts to The Last Degree, focusing on the James Martin character.  Dina also freelances for various entertainment blogs.

Dina lives with her husband, two daughters, and two dogs outside of Chicago.  She is a Christian, an avid tennis player, movie buff, and self-proclaimed expert on several conspiracy theories.  When she is not writing, she is reading novels from her favorite authors Dan Brown, Anne Rice, Stephen King, Brad Thor, George R.R. Martin, and Preston & Childs.