In a city of daimons, rigid class lines separate the powerful from the power-hungry. And at the heart of The City is the Carnival of Souls, where both murder and pleasure are offered up for sale. Once in a generation, the carnival hosts a deadly competition that allows every daimon a chance to join the ruling elite. Without the competition, Aya and Kaleb would both face bleak futures–if for different reasons. For each of them, fighting to the death is the only way to try to live.

All Mallory knows of The City is that her father–and every other witch there–fled it for a life in exile in the human world. Instead of a typical teenage life full of friends and maybe even a little romance, Mallory scans quiet streets for threats, hides herself away, and trains to be lethal. She knows it’s only a matter of time until a daimon finds her and her father, so she readies herself for the inevitable. While Mallory possesses little knowledge of The City, every inhabitant of The City knows of her. There are plans for Mallory, and soon she, too, will be drawn into the decadence and danger that is the Carnival of Souls.

From Melissa Marr, bestselling author of the Wicked Lovely series and “Graveminder,” comes a brand-new tale of lush secrets, dark love, and the struggle to forge one’s own destiny.

Carnival of Souls has a real easy feel to it. Easy to read, the plot went well. The characters were a ton of fun. I really liked Mallory although I want her to be a stronger person mentally, she is strong but there are things that hold her back. Witches and daimons can be difficult to write about but in Carnival of Souls the daimons have a caste order. It’s actually quite neatly arranged. And simply put the witches and daimons do NOT get along. So you have certain, shall I say, anomalies in the story. Not of the plot but actually IN the story that help to create this really engaging world.

The worlds are actually three, the daimon world which is The City, the world right outside of The City and the world of humans. Each have different rules and different beings controlling them. Melissa doesn’t take us much outside of The City but gives us small glimpses of a world that would be terrible to live in and what it would be like to try to fight for your survival every day. The City is less barbaric but depends heavily on your birth. If you were born into the wrong caste or worst yet, have no family, you are an outcast and have to fight for your survival anyway! These worlds are teeming with things outside of the human realm and the rules that follow are things we could never imagine.

So when we meet Mallory, raised in the human world, it makes me wonder if she’s fit to move forward to any other world but this. We get to see glimpses of her strength and more importantly her stubbornness, but I wanted more! The other characters were fantastic and I think Aya is my favorite. That girl can kick some serious booty! And she has reasons for everything she does, she does not just hurt, maim or otherwise kill people for the fun of it.

This really was an interesting book, the only real downside was with twenty or so pages left, my heart was palpitating, not because of the story, I was hoping for more of a character arc or something and there was so much that needed to be brought together still! I can say that I’m hoping there will be a book two and with all that I can imagine happening, maybe even a book three. I don’t want to go into too much detail but I can say that Melissa Marr was able to bring everything together for a nice cliff hanger. A great opening for Book two.

Oh and the acknowledgements says she got Carnival of Souls from Five Finger Death Punch. That’s just awesome! They must have been on her playlist. 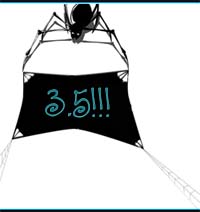