Today it’s all Shannon Mayer all the time! I hope you like zombies because we’re going to be talking about them! First my book review on Sundered, second a guest post by Shannon Mayer and then an author interview! Does it get any better? Well… at least until zombies really do break out.

A miracle drug, Nevermore, spreads like wildfire throughout the world allowing people to eat what they want, no matter how unhealthy it is and yet still lose weight. It is everything the human population has ever dreamed of and Mara is no different. Only a simple twist of fate stops her from taking the drug. 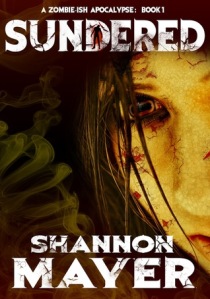 As the weeks roll by, it becomes apparent that Nevermore is not the miracle it claimed. A true to life nightmare, the drug steals the very essence that makes up humanity and unleashes a new and deadly species on the world, a species bent on filling its belly. Locked down within their small farm home, Mara and her husband Sebastian struggle against increasingly bad odds, fighting off marauders and monsters alike.

But Sebastian carries a dark secret, one that more than threatens to tear them apart, it threatens to destroy them both and the love they have for each other.

The secret forces Mara to make the ultimate choice. Will she live for love, or will she live to survive?

Fabulous zombie story! Or should I say Nevermore story? It starts off innocently enough, ish. There’s a new drug that can cure everything. Obesity, Parkinson’s, you name it, you’re cured! Side effects, none. Or so they say. It doesn’t take long to figure out that there are side effects actually and it’s none too pleasant. Just like those commercials where you can get stomach ulcers, cancer or death, here it’s just zombification, no big deal!

The plot was really good, very fast moving! The characters were pretty believable, I actually read a part to my hubby that sounded just like me, but maybe they were a little too thin. I did enjoy the fact that Mara freaks out multiple times. Sabastian is a little out of it and doesn’t take control like I would have liked him to but I think that is mostly explained later on. And it’s nothing that takes away from the story, especially once it gets going and that’s pretty fast.

Shannon Mayer doesn’t waste time on the logistics she gives us the details but doesn’t swarm us in them, which is great because all us zombie lovers want one thing, zombies! And the great thing about Sundered, she brought us an entirely different kind of zombie. Where you’re looking at this person and they are still acting like a person, they just don’t have the speech or the dexterity of a person. But they still can think just not with the clarity they used to. And their eyes still have a look that says human, that is, until they change! Gives me chills!

There are a few questions throughout the book but I’m hoping they’ll be answered in book two, Bound, which I am going to get as soon as possible! Only real downer was when the book ended. And it definitely ended on a cliff hanger! I want to know more. 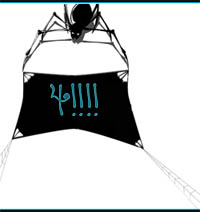 Do you enjoy a good zombie read? Which is your favorite?