Joanna Halloran, a best selling writer and astrologer, lives in a beach house overlooking the Atlantic Ocean. After a violent storm, she roams the beach, glances 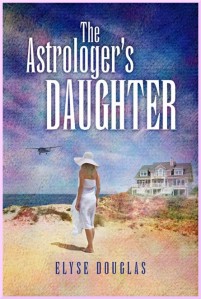 seaward and spots a man clinging to a piece of wreckage, being tossed helplessly. She dives in and pulls him safely onto the beach.

Robert Zachary Harrison is from a wealthy, political family. As he slowly recovers from a private plane crash, he and Joanna fall in love and spend passionate and sequestered weeks together. But because of family duty, Robert makes the painful decision to leave her and return to his fiancée and political life. He departs, not knowing Joanna is pregnant.

Twenty five years later, Senator Robert Harrison is running for President of the United States. In the midst of a contentious presidential campaign, Joanna’s daughter, who has a passion to expose secrets, seeks revenge on her father. She is also falling in love with her father’s adopted son.

As secrets emerge, Joanna and Robert meet again and confront the past and present. Robert confesses a secret that Joanna had never known. Now, on the world stage, they struggle to keep their families and careers from destruction.

This isn’t my normal read. A sorta whirlwind romance, political type of book. I’m not really interested in politics but this story is about what someone will do because of their goals. In this case, Bob Harrison wants to be the President of the United States. His family and his fiance’s family have been groomed since birth for politics and Bob Harrison feels it’s not only a part of his life, but truly a part of him. He strives to be a different person than the other political idiots we have out there. He wants to make a difference without lying, cheating and stealing. But the main part to him is that he truly wants to be the President. It’s a life’s goal.

So! When Bob is faced with choosing to stay with the woman he is madly in love with or the political route, it’s a difficult decision and one he doesn’t make lightly but it also sets up the entire plot of the book.

There were a lot of politics in this story but that’s my only true downside. It’s intriguing and I enjoy intriguing stories. Plus it’s definitely not my normal genre and I love to venture out. Sometimes it pays off, sometimes not. This time I think my time was well spent. The characters are really interesting and I enjoyed reading about what they were going through and how one summer whirlwind romance affected so many people, both in good and very bad ways and how the choices surrounded those circumstances changed lives, forever.

Joanna and Bob Harrison are very interesting people. Both with flaws, both hurting and needing something they know they can’t have. It makes this story move. Bob Harrison’s political career is THE reason he makes the choices he does and if not for those choices, and his love of politics and wanting to be a better man, this story would go nowhere. So, although the politics didn’t necessarily interest me, they were needed. They are the main reason he made so many choices that I didn’t agree with, but totally understand. Those choices, and politics are an integral part of him and you can see throughout the book that not all of the choices he made did he agree with.

Joanna also made some interesting choices. And that brings me to another note. She is an Astrologer. For me this was huge fun! I love astrology and anything to do with it. For someone else, maybe not so much. But if you can read the tid bits about the astrology and just understand that it helps Joanna make all of her decisions, then it will not bring the book down for you. However in love with Astrology Joanna is, it’s her strength of character that I loved about her. It seems that she’s weak, that she doesn’t speak up for herself or that she doesn’t want people around her, but in reality she had to be strong to go through some devastating things in her life. And she goes through them with her head held high and looking at the transits in her horoscope!

I finished this book with a sigh. The ending was beautiful. The characters really reached out to me and in the end, even after all the politics, the book was really good.

That being said, I would definitely recommend this book. I know many, many people that would absolutely LOVE it. And they don’t have OCD so they probably wouldn’t even notice the outfits! Most of which are blue and white.

Some of my favorite quotes:

Do your best during the day. Do what your good conscience tells you to do at all times, so that you can sleep well at night; so that you can be proud of your life. Then no matter what comes, you’ll have your own inner integrity to keep you strong.

The art of living is more like wrestling than dancing, in that we stand watchful and rooted to meet whatever comes from unexpected directions.

I’m lucky enough to not only do a book review for The Astrologer’s Daughter but to have an author interview with both Elyse and Doug.

If you could travel in a Time Machine would you go back to the past or into the future?

Disclosure: I received a review copy of this book from the author through Orangeberry Book Tours. I did not receive any payment in exchange for this review nor was I obligated to write a positive one.