We have a lot of young adult to look forward to today! But I must start with one of my favorite authors, Christine Feehan. She never lets us down and I’m sure this one will be amazing!

In a world so dark and seductive, expect nothing less than a triple-cross in the explosive all-new Ghostwalker novel by #1 New York Times bestselling author Christine Feehan…

In an underground club, a high-ranking public official spends his secret nights indulging in fantasies as exciting as they are depraved. For a seductive employee of the Dungeon, it’s her job to fulfill them. But she’s playing a far more dangerous game—one of blackmail, politics, and murder that reaches into the shadow world of the Ghostwalkers, and the creation of a spectacular, one-of-a-kind new weapon of defense.

But when a dictator makes his own catastrophic moves, the Ghostwalkers have no choice but to bring in two major players—a man and woman both driven by passion and revenge. Both expendable. Both with nothing left to lose. — Goodreads

Before Peter Pan belonged to Wendy, he belonged to the girl with the crow feather in her hair. . . .

Fifteen-year-old Tiger Lily doesn’t believe in love stories or happy endings. Then she meets the alluring teenage Peter Pan in the forbidden woods of Neverland and immediately falls under his spell.

Peter is unlike anyone she’s ever known. Impetuous and brave, he both scares and enthralls her. As the leader of the Lost Boys, the most fearsome of Neverland’s inhabitants, Peter is an unthinkable match for Tiger Lily. Soon, she is risking everything—her family, her future—to be with him. When she is faced with marriage to a terrible man in her own tribe, she must choose between the life she’s always known and running away to an uncertain future with Peter.

With enemies threatening to tear them apart, the lovers seem doomed. But it’s the arrival of Wendy Darling, an English girl who’s everything Tiger Lily is not, that leads Tiger Lily to discover that the most dangerous enemies can live inside even the most loyal and loving heart.

From the New York Times bestselling author of Peaches comes a magical and bewitching story of the romance between a fearless heroine and the boy who wouldn’t grow up. — Goodreads

And if you think that sounds awesome (which I do!) then you may want to read one of the first reviews done by Cupcake and a Latte. 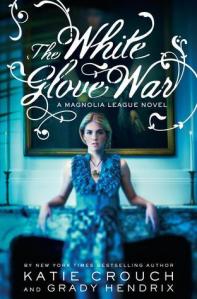 Every society has its secrets.

The members of Savannah’s Magnolia League have it all: money, beauty, power, and love. Some may call them lucky, but we know better. Spells, potions, and conjures are a girl’s best friends, and thanks to the Buzzards — a legendary hoodoo family — the Magnolias never run out of friends.

Golden girl Hayes Anderson would never dream of leaving the League or Savannah, where there’s no problem that can’t be fixed with a cup of Swamp Brew tea — served in a bone china cup, of course — and no boy who can’t be won over with a Conjure Up a New Love spell.

But when danger lurks and family secrets are unearthed, Hayes discovers that her life may not be charmed after all. 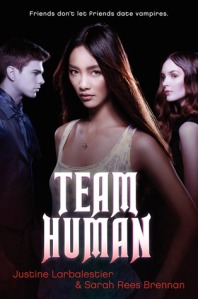 Just because Mel lives in New Whitby, a city founded by vampires, doesn’t mean she knows any of the blood-drinking undead personally. They stay in their part of town; she says in hers. Until the day a vampire shows up at her high school. Worse yet, her best friend, Cathy, seems to be falling in love with him. It’s up to Mel to save Cathy from a mistake she might regret for all eternity

On top of trying to help Cathy (whether she wants it or not), Mel is investigating a mysterious disappearance for another friend and discovering the attractions of a certain vampire wannabe. Combine all this with a cranky vampire cop, a number of unlikely romantic entanglements, and the occasional zombie, and soon Mel is hip-deep in an adventure that is equal parts hilarious and touching.

Acclaimed authors Justine Larbalestier and Sarah Rees Brennan team up to create a witty and poignant story of cool vampires, warm friendships, and the changes that test the bonds of love. — Goodreads

When foster teen Jane Williams is invited to attend elite Birch Grove Academy for Girls and escape her violent urban neighborhood, she thinks the offer is too good to be true. She’s even offered her own living quarters, the groundskeeper’s cottage in the center of the birch grove.

Something’s not quite right about the school — or is it Jane? She thinks she sees things in the birch grove at night. She’s also beginning to suspect that the elegant headmistress and her sons are hiding secrets. Lucky is the gorgeous, golden son who is especially attentive to Jane, and Jack is the sardonic puzzling brother.

The school with its talented teachers and bright students is a dream for a science and math geek like Jane. She also loves her new friends, including hilarious poetry-spouting rich girl, Mary Violet. But the longer Jane stays at Birch Grove, the more questions she has about the disappearance of another scholarship girl and a missing faculty member.

Jane discovers one secret about Birch Grove, which only leads to more mysteries. What is she willing to sacrifice in order to stay at this school…and be bound to Birch Grove forever? — Goodreads

← Book Review: The Color of Magic by Terry Pratchett
Book Review: Dance with the Devil by Sherrilyn Kenyon →