First two children are missing. One is found but is dying in the hospital. Just as he is starting to look better he collapses. And as if this isn’t a bad enough tragedy for a small town, people start turning up missing from every corner of the town. People are dropping like flies and nobody knows why. But a few people suspect something that has to do with a house. The house on the hill and the men that just bought it.
‘Salem’s Lot is a small New England town with white clapboard houses, tree-lined streets, and solid church steeples. That summer in ‘Salem’s Lot was a summer of home-coming and return; spring burned out and the land lying dry, crackling underfoot. Late that summer, Ben Mears returned to ‘Salem’s Lot hoping to cast out his own devils… and found instead a new unspeakable horror.

A stranger had also come to the Lot, a stranger with a secret as old as evil, a secret that would wreak irreparable harm on those he touched and in turn on those they loved.

All would be changed forever—Susan, whose love for Ben could not protect her; Father Callahan, the bad priest who put his eroded faith to one last test; and Mark, a young boy who sees his fantasy world become reality and ironically proves the best equipped to handle the relentless nightmare of ‘Salem’s Lot.

Salem’s Lot starts out very quietly in a small town where you don’t even have to lock your door because you already know all of your neighbors and all of their neighbors. It’s a quaint place with a small 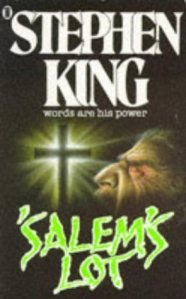 enough population to make life easy. But in this quiet town when something goes bad everyone hears about it and in the matter of a couple of days, a lot of bad is going around. Slowly at first, creeping into your bedroom at night until the bad is in bed with you and  you don’t even realize it’s there. You have let it in and now you have to lie in bed with it, but what’s worse, half the time you know. You know that something is wrong but nobody believes in ghost stories so you don’t want to open your mouth and sound foolish, so you don’t. You just let the bad guys in through your window.

Again, fantastically Stephen King! I should have read this years ago. I could feel my heart speeding up as the plot got thicker. And SK is able to keep the predator far enough behind doors that even when you’re suspecting what is going on, you don’t know for sure. Wonderfully written, as usual. I would definitely recommend to anyone that is ready for a couple of Fright Nights! 😉

Downside to this story? Although it is epically Stephen King, you can easily tell that it is early Stephen King. The plot moves at a pretty good pace but slower than quite a few of his books. The characters are pretty interesting but at the same time it’s a wonder that none of them are strong enough to survive. Or maybe I’ve seen too many horror movies. It just seems to me that people are smarter than this. Town comes together, fight the villain, kill the villain, town celebrates. Maybe that’s too cliche though. As I said, I did enjoy this, it’s just not one of my favorites.