Buckle your seat belts kids, we’re going for a ride!

Grim Reaper End of Days by Steve Alten is at the very least a roller coaster ride through hell. The main character’s wife, Patricia loves Dante’s Inferno and as the main character, Shep (Patrick Shepherd) goes through 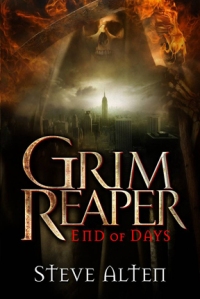 his trials throughout the book he goes back again and again to the passages in Dante’s Inferno.

Most of this book is about spirituality, although you wouldn’t know it while you learn about bio terrorism, conspiracy theories and war stories. Shep isn’t alone in this story however, all of the world sits by while wars, killing, rape, greed runs rampant. It’s better to turn your eye than to do something about it, to speak against those in power, those with the money.

No Snowflake in an avalanche feels responsible — Page 96

Everyone has a part to play in this book. Each character is pivotal to the development of the story, and to the development of what happens after the plague is released, on purpose, in Manhattan. As we go through the book, we learn that Shep’s role isn’t that small, but he must be assisted by many others to get to where he needs to go. His friend Virgil helping him more than most to descend through the layers of his own hell, while he figures out and tries to work through the guilt of the many years at war, and the many sins he committed.

Patrick “Shep” Shepherd was a promising major league rookie baseball pitcher when September 11th, 2001, hit. Shaken by the attacks, Shep left behind his soul mate and newborn daughter to enlist in the Armed Forces. Eleven years and four deployments later, Shep finds himself in Manhattan’s VA hospital. His left arm is gone, his wife and daughter are gone, and he is haunted by the nightmares of war. December 21st.: While world leaders meet at the U.N., Mary Klipot, a bio-hazard level-4 scientist working at the CIA labs in Fort Detrick, enters the Big Apple with Scythe, a swift-acting version of the Black Death designed to wipe out America’s enemies abroad. Believing she is carrying out God’s wishes, Mary infects herself, then unleashes Scythe upon Manhattan. The threat of a worldwide pandemic forces officials to seal off the island . . . the president among those trapped. Determined to rescue his wife and child, Shep follows his guide, Virgil Shechinah, through the plague-infected neighborhoods of Manhattan, revisiting the “Nine Circles of Hell” as portrayed in Dante’s Inferno. And the Grim Reaper, loosed upon the land by a humanity who has once again tipped the scales in favor of evil over good, is stalking Patrick Shepherd.

Once Mary releases the plague we live through the eyes of the victims, who are quite literally facing a hell on earth as they try to survive. Some pillage or resort to all sorts of violence just as they did prior to the plague. But others have the light in their hearts to have faith in God and that everything, even hell on earth is for a reason. As Shep and his friends learn the reasons, they also learn why Shep is there and what he must do to save not only himself and his friends, but all of civilization. I don’t want to give anything away about the story and there was one paragraph that really spoke to me. So, without telling you anymore about this story, I’m still going to share this paragraph.

We’re all God’s children. All of us. The real sin is man’s refusal to become what we are. Spirituality isn’t about religion, it’s about loving God. Two thousand years of bickering, persecution, hatred and war, all caused by some silly competition over who Daddy loves best. All we have to do is love unconditionally. When each man becomes his brother’s keeper… that’s when everything changes. It’s not too late.
If you do not like spirituality, do not let this turn you away. This book has some serious spots that had my heart palpitating! Absolutely loved every bit of it. Although Bubonic Mary isn’t my favorite person… but  you’ll see what happens to her. All I can say is marshmallow!

And my favorite quote from Shep when you know he has finally found his inner bad ass! Go Shep Go!